I am Diane (Di) Hakala. I completed my Ph.D. at the University of Cambridge in 2015. The world already has several useful tech tip sites. Despite these excellent resources, I have discovered a few specific solutions to tech challenges, which have not been fully discussed elsewhere. These mainly concern word processors, but I may venture into other topics from time to time.

I have come upon these tips in the course of writing my doctoral thesis and helping friends publish their books. Those most likely interested in the blog topics are those working in Theology, Biblical Studies, Asian and Middle Eastern Studies, Philology, Classics, and History. I will only post when I have something new.

I continue to work with both Windows and Mac computers, and though I have my hardware/software preferences, I have learned that everyone works differently and has different requirements. The best tools are the ones you use, so choose what works for you!

RTL on Office 2016 Mac –Finally, Third-party RTL Keyboards and Syriac Fonts Now Work! But… the fix is not from Microsoft

Third-party RTL Keyboards
I reported on 10 March 2016 that third-party or ‘custom’ (non-Apple) RTL keyboards, like Syriac, Hebrew TH and Biblical Hebrew Sil, are not recognised as RTL in Office 2016 Mac. They are treated as ‘English’ in the language bar, and type Left to Right. They also will not activate the RTL/LTR buttons.

I have no idea why Office 2016 Mac is looking only for .bundle and not .keylayout, and whether they may change it in the future. And let me reiterate, all these keyboards work just fine in Mellel and LibreOffice.

So how do you do this link a language to a keyboard and change it with file extension 'bundle'? With an application (free) called ‘Ukelele’ (yes, that’s the spelling and yes, it’s not the correct way to spell the instrument). By the way, there are no shortcuts. You can't change the extension in Finder and hope. And you MUST associate the keyboard with a language.

Here are the instructions. They may seem complicated, but they aren't really, I've just included a lot of pictures.

2.     Make sure you have your third-party keyboard in the Input Source menu, by clicking the Flag in the upper right of your screen. If your keyboard is there, go to #3 below.

For example, let’s change the Syriac keyboard layout. Right now, it’s not one of the Input Sources under the Flag. 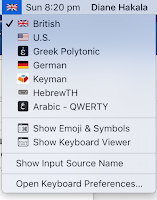 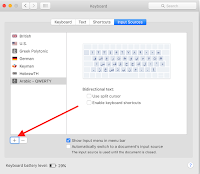 The Syriac keyboard, like most third-party keyboards that aren’t working, will be in ‘Others’. Highlight Syriac JChill and click ‘Add’. 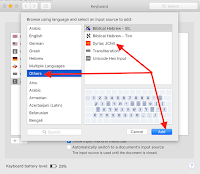 3.     Go to the Input Source menu at the top of your screen (the Flag), and click on the Syriac keyboard.

4.     In the Applications menu, open Ukelele.app

5.     In Ukelele, go to File/New From Current Input Source

6.     In the popup menu, you will see the name of your keyboard. Notice that there is no language associated with the keyboard. Click on the button called ‘Language’.

7.     In the first section, ‘Language (required)’ find the language you want to associate with your keyboard. In this case, Syriac. Click ‘OK’. 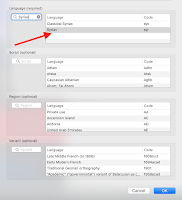 8.     The keyboard will now have a language associated with it. Click on the red button button in the upper left corner of the popup to exit.

9.     Give your keyboard a title in ‘Save As:’. Store it in a temporary area like Desktop. ***And this is the most important. In File Format make sure it is set to ‘Keyboard Layout Bundle, and NOT Keyboard Layout. Click ‘Save’. You will see that your Syriac keyboard now has the file extension ‘.bundle’.

10.  Open Finder and go to Go to Macintosh HD/Library/Keyboard Layouts. Drag and Drop or Copy and Paste the keyboard.bundle into this file.

11.  Now, go to the Flag and click Open Keyboard Preferences. Remove your third-party keyboard by clicking the ‘-‘. Then click the ‘+’. You will see that there is a new menu item called ‘Syriac’. If your keyboard.bundle was Hebrew, it will be in the Hebrew menu. Click on Syriac, find your keyboard and click ‘Add’. 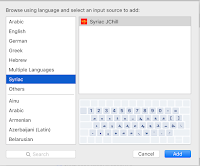 Now try your keyboard, and you will see that it works just fine! And now the third-party keyboards activate the LTR/RTL buttons!

But another accidental discovery that I made allows you to work with Syriac fonts in Version 15.20. The secret? Save your Word Document as extension .doc and NOT .docx. The fonts work perfectly.  Warning: you must save it to a .doc file when you first use the Syriac fonts, and every time after. Otherwise, Word will revert to Estrangelo Edessa.

And another warning: this is not a long-term solution. .doc and .docx are very different animals and you will be inviting a rash of compatibility issues. Microsoft Word experts everywhere are cringing at the thought. But .doc does the trick!

Have a great week!